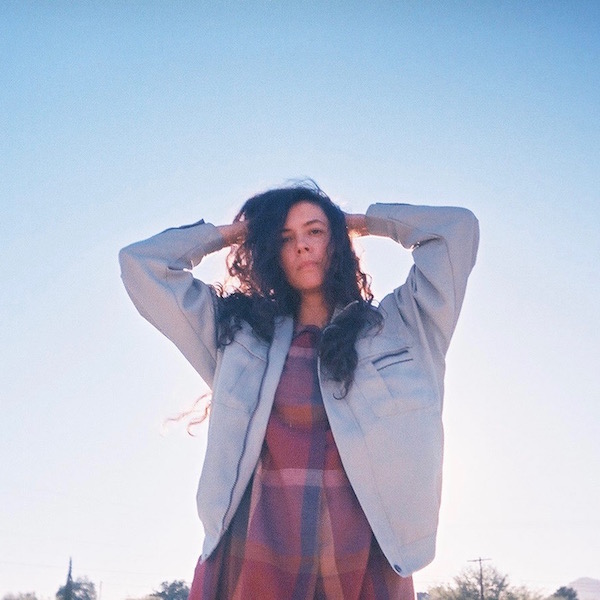 Tucson, Arizona interdisciplinary artist Karima Walker walks a line between two worlds. Aside from her long resume of collaborative work with artists in the diverse fields of dance, sculpture, film, photography and creative non-fiction, Walker has long nurtured a duality within her work as a musician, developing her own sonic language as a sound designer in tandem with her craft as a singer/songwriter. The polarity within Walker’s music has never been so articulately explored, or graced with as much intention, as on her new album, Waking the Dreaming Body.

Waking the Dreaming Body was written, performed and engineered entirely by Walker, with the exception of some subtle upright bass from C.J. Boyd on the song “Window I.” Producing the album on her own wasn’t Walker’s original intention, though; after flying to New York in November 2019 to develop some home-recorded tracks with The Blow’s Melissa Dyne, a sudden illness forced Walker to cancel the sessions and return home to Tucson to recover, and soon after, the COVID-19 pandemic ruled out the possibility of a return trip to New York. Instead, Walker decided to finish the album herself in her makeshift home studio. She spent the following months recording, processing and arranging her self-described “messy Ableton sessions” into densely harmonic arrangements of synthesizer, guitar, piano, percussion, field recordings, tape loops and her own dulcet singing voice, allowing trial, error and intuition to guide her way. The final result is a 40-minute dream-narrative of her conscious and subconscious minds that oscillates between the rich textures of her ambient compositions (as in the instrumentals “Horizon, Harbor Resonance” and “For Heddi”) and the melody and poetry of her melancholic, Americana-tinged songwriting (as in the lyrics-focused tracks “Reconstellated” and “Waking the Dreaming Body”), their ebb and flow recalling liminal states of half-sleep where images and emotions are recalled and forecasted from the previous night's dreams. Night falls in regular intervals throughout the album, forming a natural dialogue between waking and dreaming.

“I wanted these songs to stand alone as complete worlds, and this required a shift in my usual way of writing. I found myself trying to escape from an excess of interiority by exploring outward, by thinking about the mirroring that happens when you seek connection to others and to the natural world—when you try to bring the outside in. I sought to make arrangements that swell at certain moments and barely hold together at others, moving with my breath and other rhythms connecting my body to the natural world. Ultimately, I was seeking to draw myself out, to reconstruct my personal narrative.”

“I see myself as an in between person I guess,” Walker continues. “Though I haven't very explicitly brought my own personal history into my music, I think it's there, and it continues to show up in its own ways and time. I am Arab, half North African/Tunisian on my mother's side, but was raised in a very white context, with a lot of white passing privilege, especially as I've gotten older. My mom came to California as an immigrant to this country after marrying my dad in the rural village where she grew up. She came to Los Angeles and was working at McDonald’s and different Mediterranean restaurants around the city, and was kind of discovered at one of these jobs. The singer didn't show up one night, so her coworkers told her to sing a couple songs she knew. She only knew three by heart and she sang them over and over again that night. That was the beginning of her career, and she has worked as a singer in Europe and North Africa for over twenty years now. She's like a jukebox for the Arab diaspora and beyond. I didn't grow up with her, though, knew almost nothing about her, except that she was Tunisian and was a singer and that she left when I was little. I think that planted a seed in me, even though what I do is very different from her idea of being a singer. She has this rich full big voice, she listens to my records and then sits me down and says, "You know Whitney Houston, right? Why don't you sing like her?" The difference in what we do is laughably different! But my journey into making music was so different. I kept falling in love with musicians and artists for a while before I realized that maybe I wanted to be so close to these people because they were doing something that resonated deeply in me. So there's a way in which making music has been a way for me to overcome divides that I couldn't quite articulate in other ways. Maternal lineage, intimacy and connection, but also, with this record, attempting to overcome my own internal divides.”

Waking the Dreaming Body holds a deep connection to the environs in which it was created, and the mountains, rivers and starry skies of Walker’s desert home are referenced in nearly every song she sings on the album, simultaneously grounding the action and imbuing it with a sense of otherworldliness.

Sonoran sky plays a movie
Draw a line to the stars inside of me
Write it down, tell your friends
I know where I am but I can’t tell where I started
— “Reconstellated”

“Tucson is where I grew up, I moved here from California as a kid,” Walker recalls. “And after leaving for school and traveling, I moved back about seven years ago. It's such a distinct and notable place to folks not from the desert, but this is my home. My formative understanding of the natural world, aside from the ocean, comes from here, so it always seems to make its way into my work. I think that porousness would be there regardless of where I was, but I do think that the pandemic forced me back into the desert seasons in a way that I hadn't experienced since I was a kid. We had one of our hottest and driest summers on record, and I usually try to tour when it’s super hot at home. But this year I was kinda stuck, the mountain where everyone runs away from the heat, about an hour away, caught fire and burned for weeks so there really was no escaping it. I started thinking about our rivers- they're called dead rivers or washes, because they don't run usually, and our watershed, all the plants that survive here and the seasons that were still happening even under all the stress of this summer.”

Throughout Waking the Dreaming Body, Walker’s uncanny sound design evokes the delicacy, grandeur and terrifying enormity of the American Southwest. Close your eyes while listening to “Horizon, Harbor Resonance,” the thirteen-minute instrumental at the album’s center, and watch the shifting desert landscape in your mind’s eye; from the babble of flash flood runoff to the slow parade of cumulus cloud shadows across the red earth, cactus and creosote, and then, moving backwards in time, the thunderous eruptions of ancient volcanoes that pushed the Tucson Mountains skyward.

“Waking the Dreaming Body was influenced by my preoccupation with natural sublime phenomena: tsunami videos and the dreams of ocean waves I was having last year, large mountain ranges that can only be seen by a plane or over the course of a day of driving. These images allowed me to think about immense horror and beauty—something that overwhelms but simultaneously is so hard to look away from, something that holds violence but also reflects a better understanding of ourselves in the context of that immensity and scale. Looking out and looking within, and knowing that the divide is false, but feeling the pain of that division nonetheless.

“Waking the Dreaming Body became an attempt to break out of my insularity, wrestling with my separation from the natural world. I write about mountains and rivers but all through more of a longing and detachment. Maybe there’s hope in there? I made this whole record almost entirely alone so I’m actually not sure if I make it to the other side.”

Waking the Dreaming Body is out February 26, 2021 on Keeled Scales / Orindal Records.