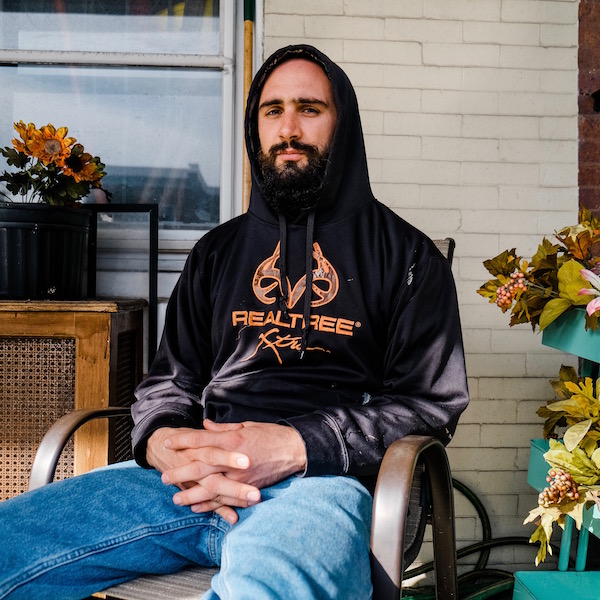 Dan Wriggins is a Philadelphia-based songwriter, musician, and poet. He grew up in the town of Yarmouth, Maine, and on Islesford, a small island community near Bar Harbor. In high school, he started playing piano and guitar, and met bandmates Michael Cormier and Peter Gill. He worked on lobster fishing boats before moving to Philadelphia and starting the alt-country band Friendship in 2015, with whom he has toured the US and Canada extensively. He lives and sometimes tours with his dog, Roy.

"I recorded 14 songs with Brad Krieger at his beautiful studio in Lincoln, RI in October. Mike Cormier played everything but guitar, and some pizzicato plucks on “Yellow Bricks,” courtesy of brilliant pilgrim Lina Tullgren. I didn’t want any bass, so Mike found a humongous kick drum. The five songs that make up “Mr. Chill” hung together best, so I made an EP. The songs are fragmentary. Scenes and images come from memories, dreams, friends, books, lullabies, tv shows, etc. I wanted it to sound, as usual, like Kath Bloom or Vic Chesnutt. Mike was thinking of Glen Campbell. I’ve gotten “hey man, your music is so chill” a lot, and I’m like what the fuck??? I thought it was DIRE.

I wrote the song “Mr. Chill” while working for an arborist/tree care company in the Philly suburbs. The hours were long and strenuous, and like most of my friends, I was balancing full time work with writing music and playing shows. That’s where the clock-punching lyrics come from. This was a couple years ago, and I am only realizing now that “Mr. Chill” might be a Christmas song. It also reminds me of the Disney ride “It’s a Small World.” It’s the only song I’ve written so far that does not rhyme.”

"Dan Wriggins, who heads up the very good Philadelphia band Friendship, is releasing two new solo songs today. 'Dent' and 'The Diner' were recorded late last year with help from Hour/Friendship’s Michael Cormier and Lina Tullgren. Both fit in with the sort of wry, laidback attitude that Wriggins has established with his main band and tackle feeling alienated and disillusioned with how we fit into the world at large." - Stereogum

"Friendship's music is on the quiet, plainspoken side to begin with, but 'Dent' and
'The Diner' do feel even more stripped-back and minimal, and the lyrics often sound like they're ripped straight out of a diary. They're both folky songs that feel ragged and lived-in (similar vibe to Neil Young, Will Oldham, etc), and they're both songs that can stop you in your tracks and leave you hanging on every word." - Brooklyn Vegan