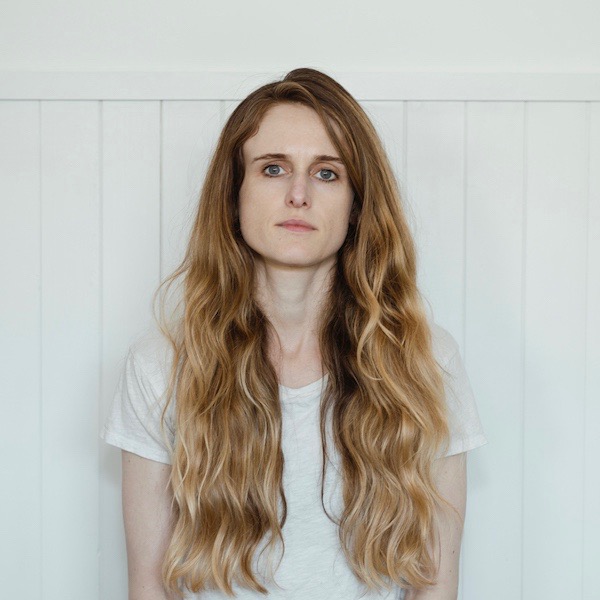 "When she sings, you believe every word."
- Sam Sodomsky, Pitchfork

Bloodless is the new album by Los Angeles-based musician and writer Claire Cronin. Expanding upon the supernatural and metaphysical themes of her critically acclaimed 2019 album Big Dread Moon and her 2020 “horror memoir” Blue Light of the Screen (published by Repeater Books), Bloodless is a powerful work of haunted Americana by one of contemporary indie music’s finest singer-songwriters.

Like its musical predecessor, Big Dread Moon, the arrangements on Bloodless’s nine songs are stripped and sparse, Cronin’s steady electric guitar and spectral voice holding center as strings and synthesizers provide wisps of eerie atmosphere. The sound of Bloodless is both more visceral and more subliminal than Big Dread Moon, due in equal part to months of intensive home recording by Cronin and Ezra Buchla (Cronin’s husband and violist) and expert mixing by Deerhoof’s John Dieterich (who previously collaborated with Cronin on her 2016 album Came Down a Storm).

Claire and Ezra had been living in Berkeley for less than a year when the pandemic took hold. While living in near-total isolation, one of the worst wildfire seasons in California history began. Cronin explains:

Some days, the air was so toxic that we couldn’t leave the house. Days passed indoors with our air filters going, while the sky outside was orange and dark from morning until dusk. The recording process was almost hallucinatory — I would lose my sense of time in the music’s repetition and the heat of the tiny room where I was playing. The photo on the record cover is from this time.

I felt trapped and hopeless and terrified — of the virus, of the fires, of what was going on in American politics. In some ways, death felt far away — numbers of
fatalities on the news — but it was also a constant threat. When I found out I was pregnant at the end of July, I had an even more heightened awareness of life and death. Most of my parts on the record had been finished by then, though, so the record isn’t about the pregnancy.

This intensity of circumstances rattles throughout Bloodless. Cronin’s vocals waver with emotion, in some moments harsh and others, soothing. It’s a voice that sounds like it knows what you’ve been through. The lyrics on Bloodless are about spiritual seeking and confusion. Though most of the
songs were written before the pandemic began, Cronin says:

I’d been doing a lot of I-Ching readings in the months before COVID hit, and I kept getting these ominous results that didn’t make any sense. I thought the oracle was punishing me for using it too much, or that it had become sinister. In hindsight, maybe it was making accurate predictions. The song “Now I Don’t Leave” is about accepting that sometimes things are just bad and you can’t win. The best course of action is to submit.

On that track, Cronin sings: “In a blur I was wandering / but my passage was foretold / Now I don’t leave, now I don’t leave / Repetition of one danger is my joy / and I am not a joyful singer.”

This fascination with the otherworldly guides much of Cronin’s work. On the title track, she employs the term “bloodless” to depict a spirit without mortal pain or needs, singing: “Must be strange not to see skin and bones / To mistrust the light — terrible / I know I’m a man, thorn in my eye / and my mind is unbearable.” Cronin says of the song:

I’m trying to imagine what it’s like to not live in a human body. Much of the record deals with this desire to transcend myself and my body and the facts of existence. But in this song, I’m making the statement that we can’t do that. We can’t get out. We’re not bloodless. And we can’t really know what’s going on in the spiritual world, despite what some religious believers say. God’s will — if such a thing exists — is a mystery. We have to keep living despite this. I’m reckoning with these truths.

Cronin doesn’t intentionally craft songs so much as follow unconscious pulls, a custom more akin to a mystic or medium than a songwriter. She concedes to an unthought intake of the world around her, and finds in it, better understanding.

The songs capture states of consciousness that are very emotional but unclear, like when your memories blur with dreams, or you hear a voice in your head that doesn’t feel like your own. Real life becomes mythological. A poetic phrase comes closer to the truth than a simple recitation of the facts.

For all of Cronin’s spiritualist leanings, however, the album is grounded and raw. Whatever metaphysical seeking takes place on Bloodless is in reaction to the kind of suffering we all experience. In “Feel This,” a song about struggling to stay present with difficult emotions and relationships, Cronin admits: “I don’t want to be in my body / what I want is to be beyond me / floating like God.”

Bloodless is out November 12, 2021 on Orindal Records.