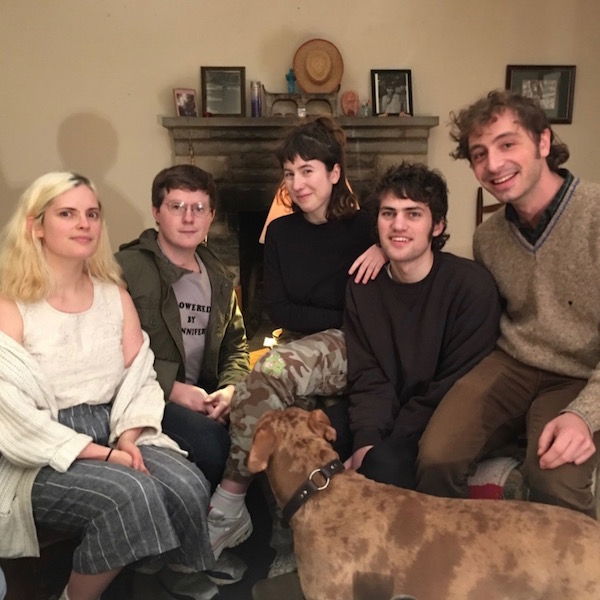 "Wednesday are a band whose intoxicating qualities might be impossible to ignore." -For the Rabbits

I Was Trying to Describe You to Someone is Wednesday’s second full-length album & first as a full band. The Asheville, NC quintet (L to R: bassist Margo Schultz, drummer Alan Miller, guitarist/vocalist Karly Hartzman, pedal steel guitarist Xandy Chelmis & lead guitarist Daniel Gorham [not pictured]) maximizes the dark dissonance of a three guitar attack to highlight the emotionality of Hartzman’s bell-clear vocals & wisps of half-recalled memories & literary references that make up her lyrics. I Was Trying to Describe You to Someone’s eight songs meld elements of shoegaze, grunge, indie pop & southern American culture into a uniquely personal style of modern rock music that resonates with power & tenderness.

Wednesday began as a recording collaboration between Hartzman & Daniel during the winter of 2017, while both students at the University of North Carolina Asheville. While living on campus, the duo recorded a whimsical synth-pop LP entitled Yep, Definitely, influenced heavily by the album Reading, Writing and Arithmetic by English alternative rock group The Sundays (the inspiration for Wednesday’s own band name). The duo recruited Chelmis & Miller (along with original bassist Julien Melissas) to play a party at Karly’s sister’s house, & the full band had an instant chemistry that won over the small crowd. With the immediate support of Asheville’s underground music scene, Wednesday quickly became a local staple, appearing often at the band’s favorite Asheville venue, The Mothlight.

Schultz replaced Melissas on bass in time for Wednesday’s first tour, & the new line-up recorded a collaborative EP with fellow Ashevillian MJ Lenderman, 2018’s How Do You Let Love into the Heart That Isn't Split Wide Open. The EP began Wednesday’s progression into darker instrumentation & lyrics, which continued on 2019’s Wednesday EP. After graduating from UNCA, Hartzman began writing the songs that would become Wednesday’s second full-length release, I Was Trying to Describe You to Someone. With the band contributing arrangements, the new songs placed more emphasis on the noise & dissonance of Chelmis’s lap steel & Gorham’s lead guitar.

The ever-darkening & deepening of Wednesdays’ sound on I Was Trying to Describe You to Someone owes a debt of influence to The Swirlies, Arthur Russell, Red House Painters, Tenniscoats, Ana Roxanne, Acetone, & their continued collaboration with MJ Lenderman (who lends backing vocals to the songs “Billboard” & “November”). I Was Trying to Describe You to Someone was recorded at Hartzman’s home with engineering assistance from her roommate Colin Miller. The depth & clarity of the recordings balance the distorted volume of Wednesday’s live performances with the intimacy of Hartzman’s voice. Her words hold the center of the chaos, unobscured by the power of the band.

Hartzman describes her lyrics as “attempts to access old personal memories & do them justice through prose, with inspiration from the writings of Richard Brautigan, Flannery O’Connor, David Berman & Tom Robbins, & movies like Steel Magnolias.”

I Was Trying to Describe You to Someone was released on vinyl & digital formats by Orindal Records on February 7, 2020. A cassette edition was released the following month.