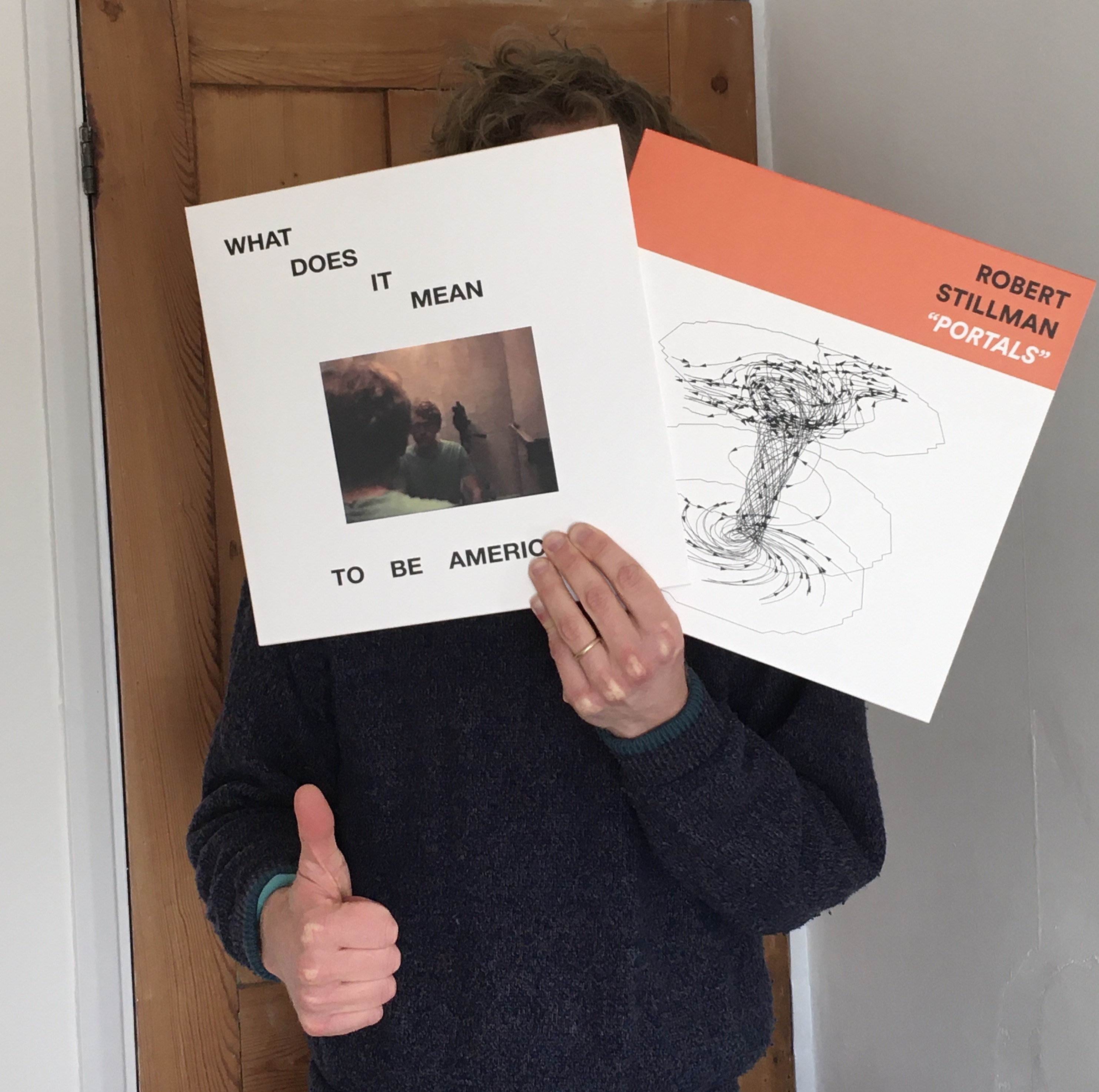 Today is the release date for TWO albums by US-born, UK-based multi-instrumentalist & composer Robert Stillman: What Does it Mean to Be American?, a brand new collection of jazz-influenced piano, saxophone, clarinet & drum meditations themed around Stillman's exploration of national identity, & Portals (2022 Remaster) an expanded & remastered vinyl edition of Stillman’s 2017 cassette of New Age-styled electric piano improvisations. Both albums were co-released with Kit Records (UK). Folks in the UK & Europe can avoid transatlantic shipping fees by ordering the new albums HERE.

Stream What Does It Mean to Be American?

Read Glenn Donaldson's review of What Does it Mean to Be American? for Free Form Freakout

Read David Wilikofsky's review of What Does it Mean to Be American? for Undrcurrents

"Robert Stillman is a multi-faceted genius. A virtuoso of DIY, one-player improvisation. A master of color, restraint, and powerful world-building." - Undrcurrents

"Recording by himself, Stillman layers saxophone, clarinet, drums, and piano. While the one-man-band approach can so often result in antiseptic, too carefully controlled sounds, Stillman’s work here remains loose, imaginative, and even conversational. Stillman is having a dialogue with himself. It’s a lively one, and you are invited to listen in." - Aquarium Drunkard

Watch Robert Stillman's self-directed music video for "It's All Is" from What Does it Mean to Be American? 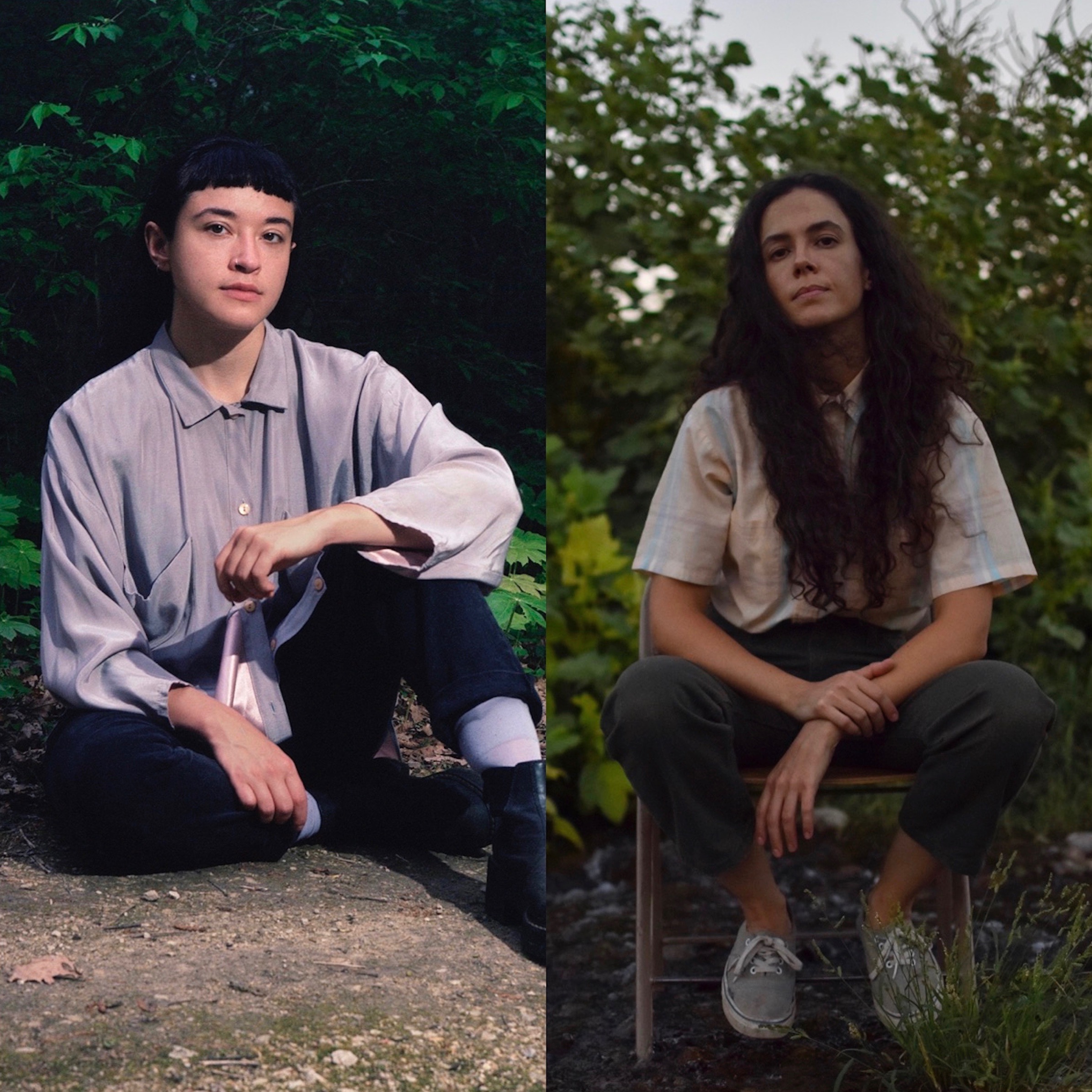 Macie Stewart & Karima Walker are teaming up for a handful of east coast live shows! Both artists will also perform their own separate Chicago dates leading up to the tour. Tickets are on sale now! 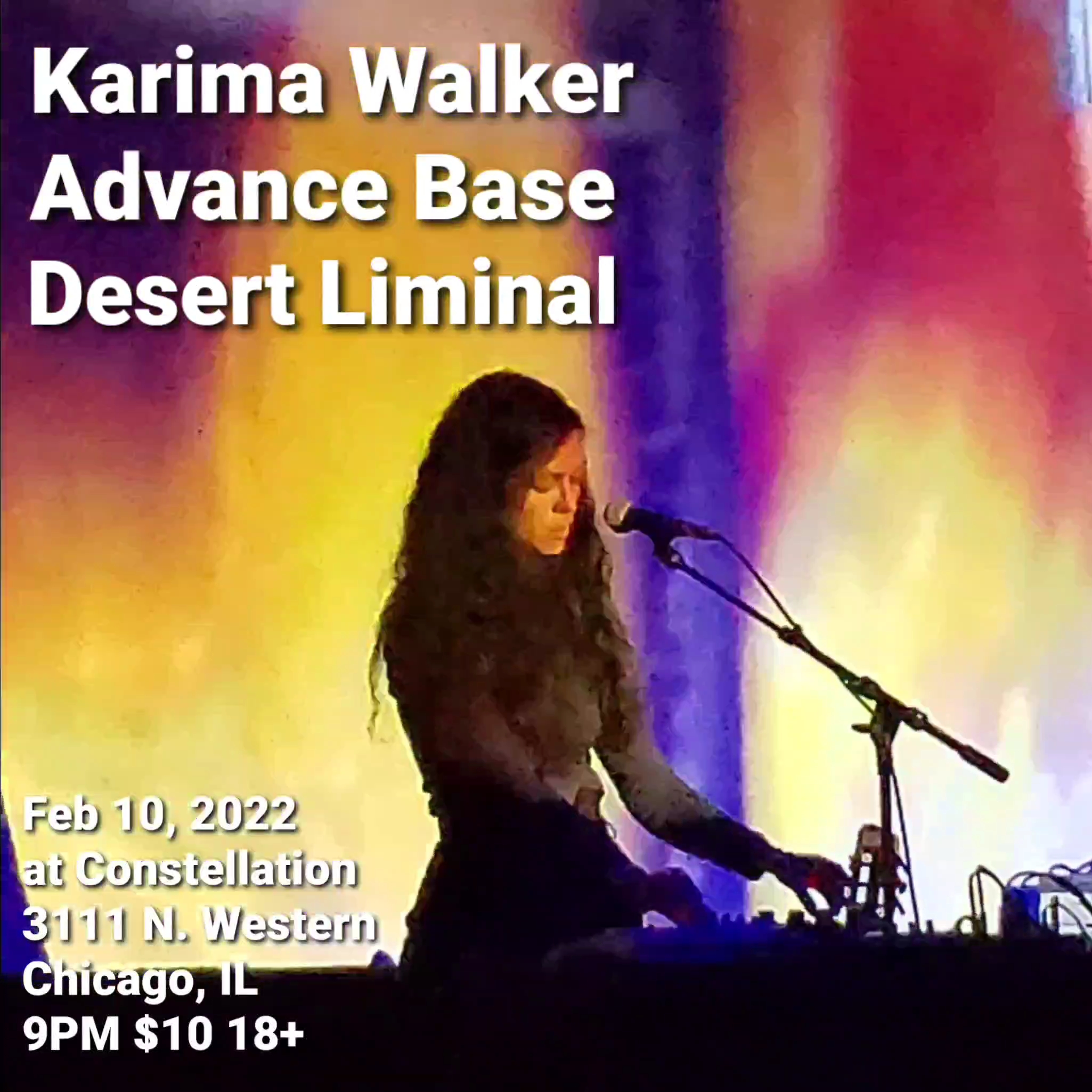 Orindal Records is hosting an evening of electronic atmospheres & warmly melancholic songwriting on Thursday, February 10, 2022 at Constellation in Chicago, IL.

(Please note that Jill Whit regretfully had to cancel her originally scheduled opening set. We are thrilled to have Chicago's own Desert Liminal on in Jill's absence!) 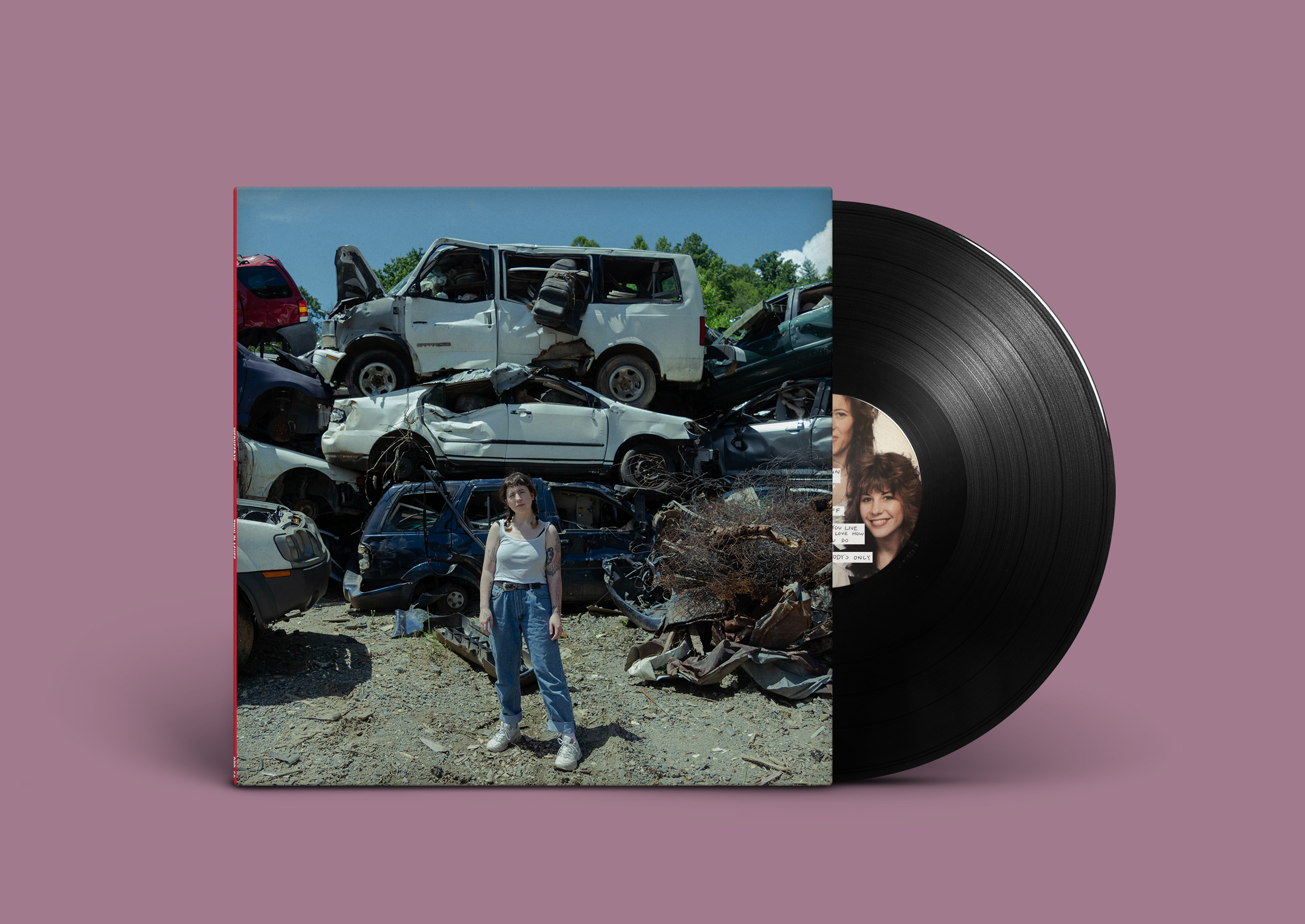 After months of delays, Twin Plagues by Wednesday is finally back in print on classic black vinyl! Pre-orders will be shipping all week.

Catch Wednesday on tour with Superchunk & Beach Bunny in 2022! You'll find all of their tour dates HERE.

Watch the music video for "It's All Is" from Robert Stillman's forthcoming album, What Does It Mean to be American? Posted 15 Dec 2021

"It's All Is" is the second advance single from What Does It Mean to be American?, the forthcoming album by UK-based, US-born composer & multi-instrumentalist Robert Stillman (out January 21, 2022 on Orindal Records (US) / KIT Records (UK)).

Under the Radar has the exclusive premiere of "It's All Is."

"Following right after 'Cherry Ocean,' the record’s opener and longest track, 'It’s All Is' is a comparatively scant two and a half minutes, almost all of which revolves around an alluring central saxophone riff. The track’s jazzy riff takes center stage but beneath Stillman crafts an intoxicating mix of clarinet, piano, and more, each played by Stillman himself. Each piece interlocks into place, creating a warm, loose, and casually inviting instrumental piece. Finally, the song descends into an ambient drone for its final moments, with Stillman continuing to prod at genre confines to the very end."

Read the full piece, including Stillman's thoughts on "It's All Is," HERE.

The Orindal webstore will be closed while I'm away on tour with Advance Base. Today is the last day that I'll be shipping orders before I close up the shop until December 20. You'll still be able to place orders & receive digital downloads, but no physical orders will ship until December 20.

As always, many Orindal titles are available via mail order from our distributors The Business & Mississippi Records.

Robert Stillman announces new album What Does It Mean to Be American? & expanded, remastered vinyl reissue of 2017's Portals. Listen to singles from both albums now! Posted 30 Nov 2021 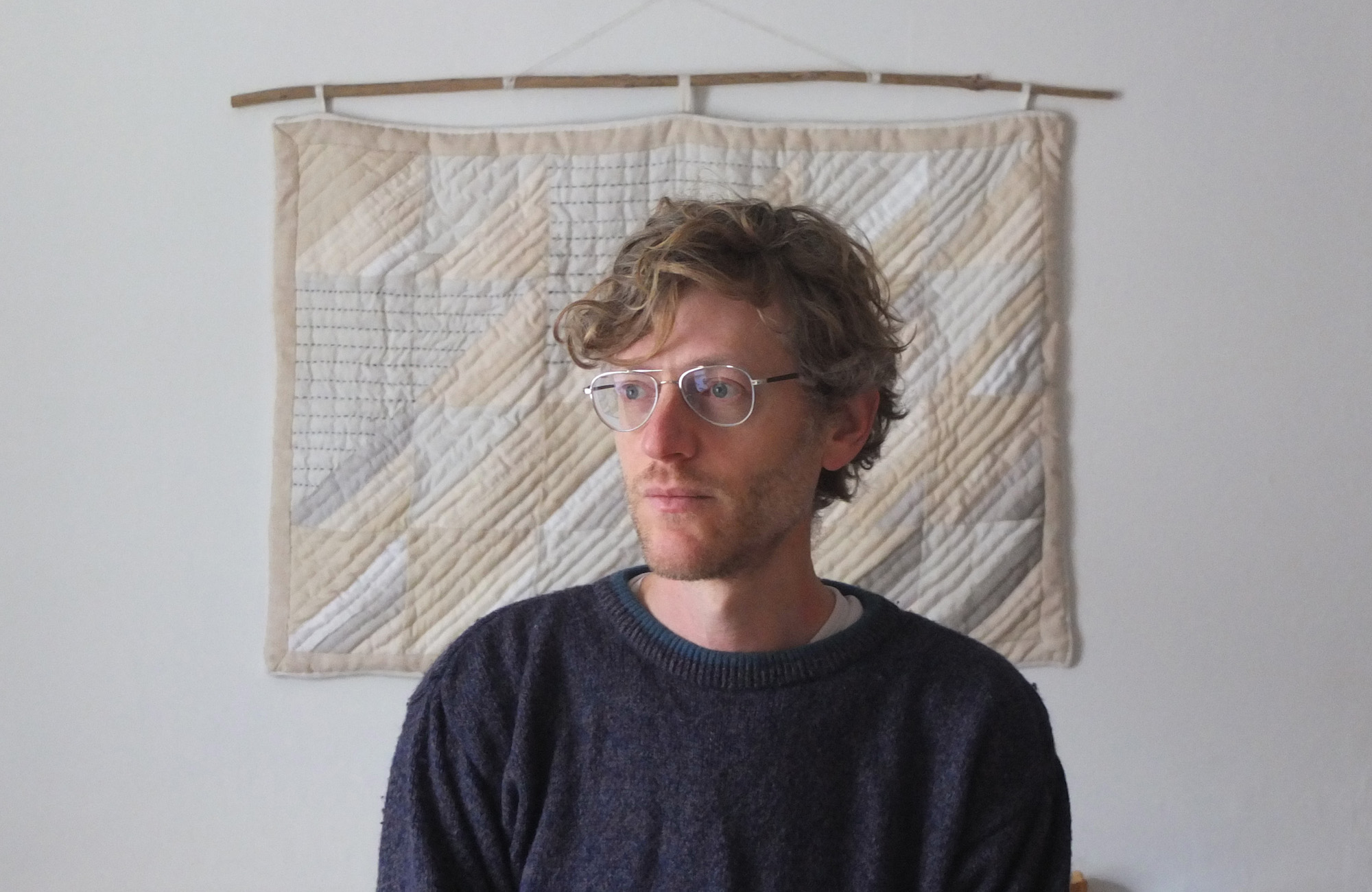 On January 21, 2022, Orindal Records (US) & KIT Records (UK) will co-release two albums by genre-defying, US-born, UK-based composer & multi-instrumentalist Robert Stillman: What Does It Mean to Be American? & Portals (2022 Remaster).

Today, For the Rabbits premiered singles from both albums: "Cherry Ocean" from What Does It Mean to Be American? & "Portals 8 (The Stranger), a bonus track from the newly remastered & expanded vinyl edition of Portals, Stillman's 2017 cassette of electric piano meditations.

For the Rabbits writes of "Cherry Ocean" & What Does It Mean to Be American?:

"An eight-minute opus, Cherry Ocean is the only track on What Does It Mean To Be American? that is not instrumental. Despite the rare foray into lyricism, Cherry Ocean is nonetheless just as boundary-pushing and eclectic as anyone who knows Robert’s music would expect. Prominent sustained piano chords and Robert’s warm vocal reminiscent of Jonathan Wilson bring the song to life, before orchestral flourishes, pitched somewhere between the world’s of chamber-music and Gerswhin-like jazz, take the song spiralling into the experimental mind of this fascinating composer. As well as introducing the genre non-adhering nature of the album, Cherry Ocean also introduces us to the themes that run through What Does It Mean To Be American? This is a record that explores nationality, identity and the American dream, asking constant questions in an attempt to make sense of the complexities that are rolled up in a nationality."

Of Portals (2022 Remaster), For the Rabbits writes:

"Originally released on cassette back in 2017, the remastered and expanded version will get a long-overdue vinyl release. The original release is now adorned with a new composition, the strange and beautiful wonder of Portal 8 (The Stranger)."

Read the full For the Rabbits article, which includes an interview with Stillman, HERE.

Pre-order both LPs or tapes together at special bundle prices HERE. 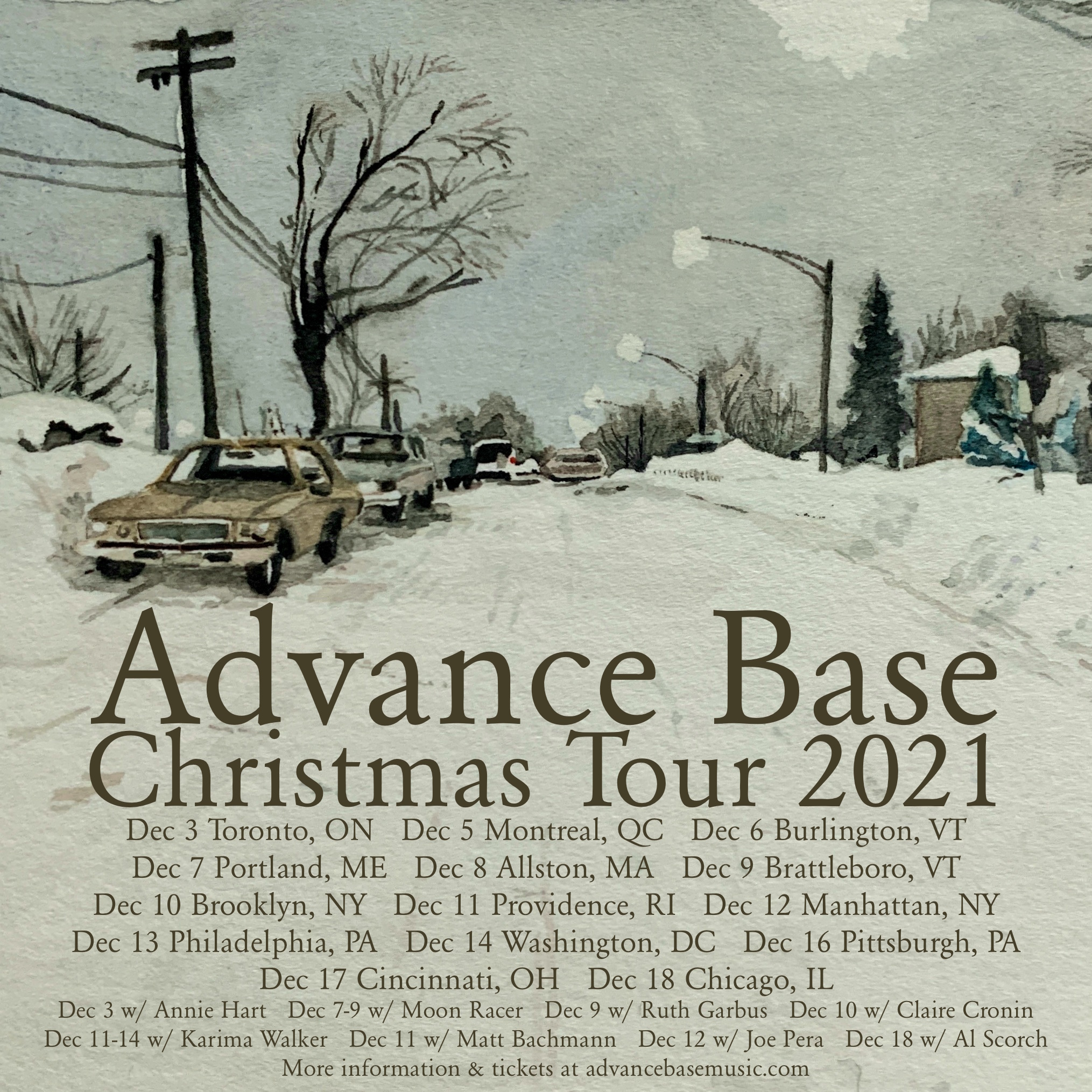 First, the bad news: Dear Nora had to cancel their east coast tour dates with Advance Base due to illness. A speedy recovery is expected, but a sudden case of vertigo due to a sinus infection has made it impossible for Katy to travel for the time being. Get well soon, Katy! 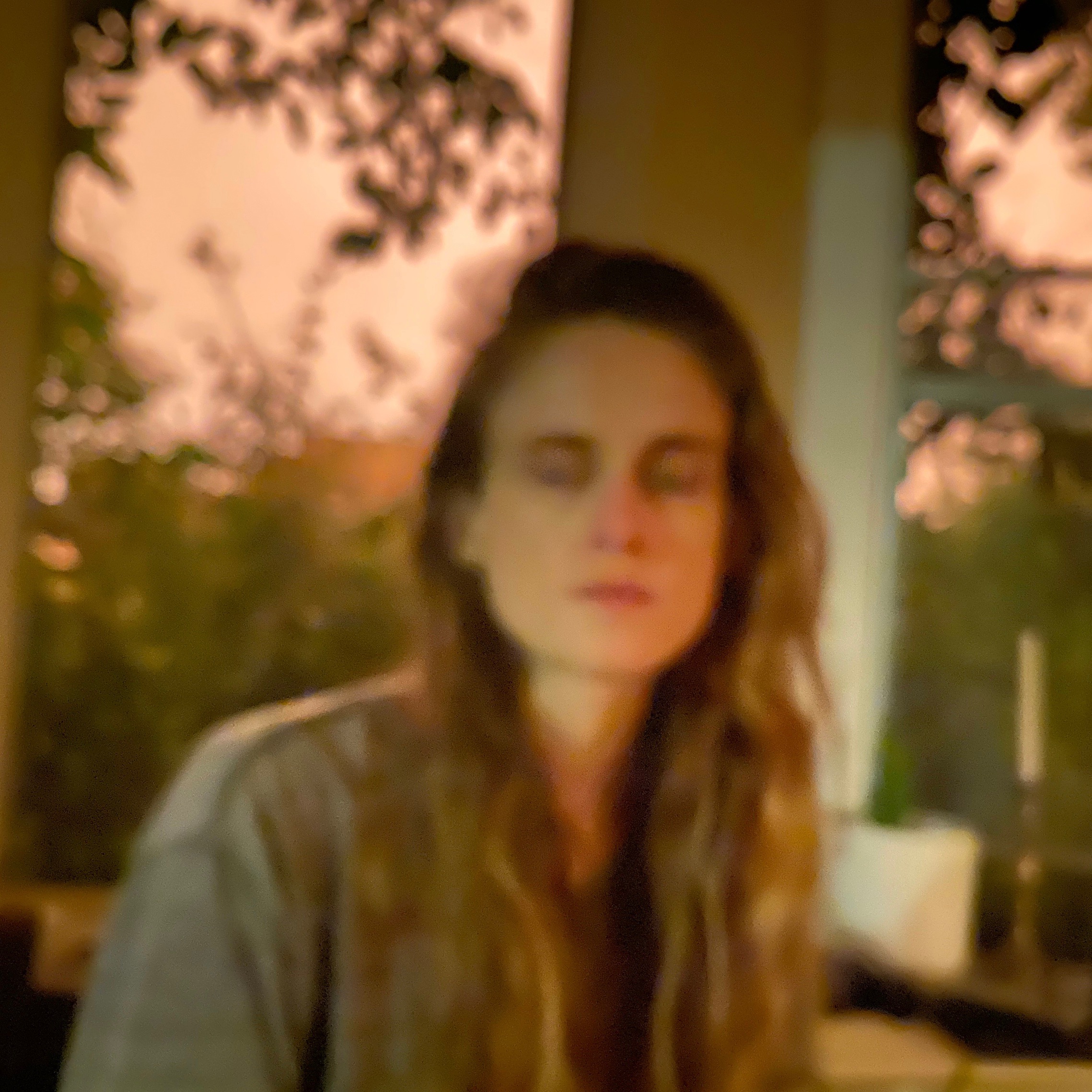 "Claire’s vocal seems to pool around you like a fog, delicate up close, yet somehow inescapable." - For the Rabbits

When she sings, you believe every word." - Pitchfork

Bloodless, the stunning new album by Claire Cronin, is out now!

Expanding upon the supernatural and metaphysical themes of Cronin's critically acclaimed 2019 album Big Dread Moon and her 2020 “horror memoir” Blue Light of the Screen (published by Repeater Books), Bloodless is a powerful work of haunted Americana by one of contemporary indie music’s finest singer-songwriters.

Like Big Dread Moon, the arrangements on Bloodless’s nine songs are stripped and sparse, Cronin’s steady electric guitar and spectral voice holding center as strings and synthesizers provide wisps of eerie atmosphere. The sound of Bloodless is both more visceral and more subliminal than Big Dread Moon, due in equal part to months of intensive home recording by Cronin and Ezra Buchla (Cronin’s husband and violist) and expert mixing by Deerhoof’s John Dieterich (who previously collaborated with Cronin on her 2016 album Came Down a Storm).

To mark the release of Bloodless, Claire Cronin sat down with her Bloodless collaborators Ezra Buchla & John Dieterich for a Talkhouse interview. Read their conversation here.

Read Trev Elkin's review of Bloodless for God Is in the TV.

Read For the Rabbits' "Get to Know" interview feature with Claire Cronin. 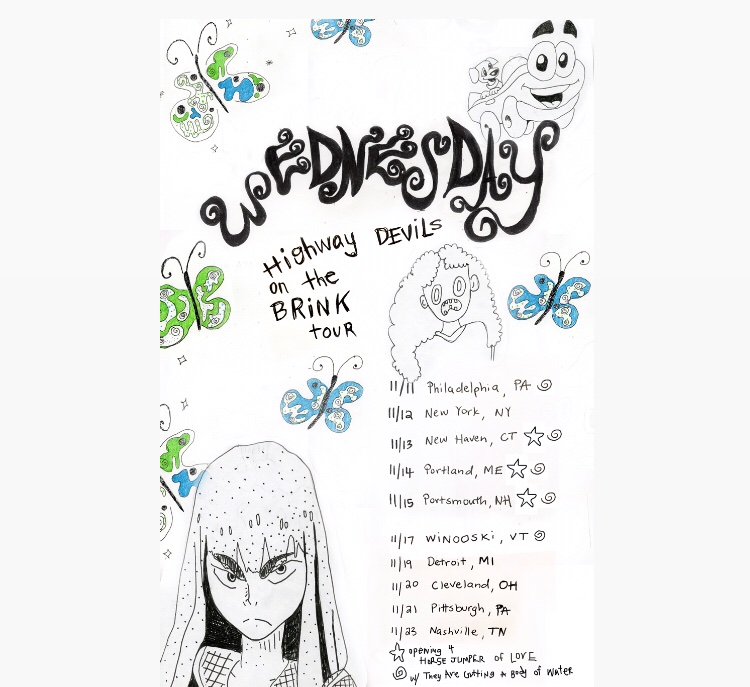 Last week's Wednesday vinyl auctions & raffle raised over $700 for Asheville, NC's Afghan refugee community! Congratulations to auction winners Annette Paige & Matt Sandrin & raffle winners Chris O'Connor, Michael Iacavone & Elaina Haas! Your rare red vinyl copies of Twin Plagues are on their way to you. If you missed the auctions & raffle, you can still donate directly to the cause HERE.

Wednesday's east coast tour w/ Horse Jumper of Love & they are gutting a body of water kicks off tonight with a sold out show at Original 13 in Philadelphia, PA! You'll find all of their tour dates & ticket links HERE. 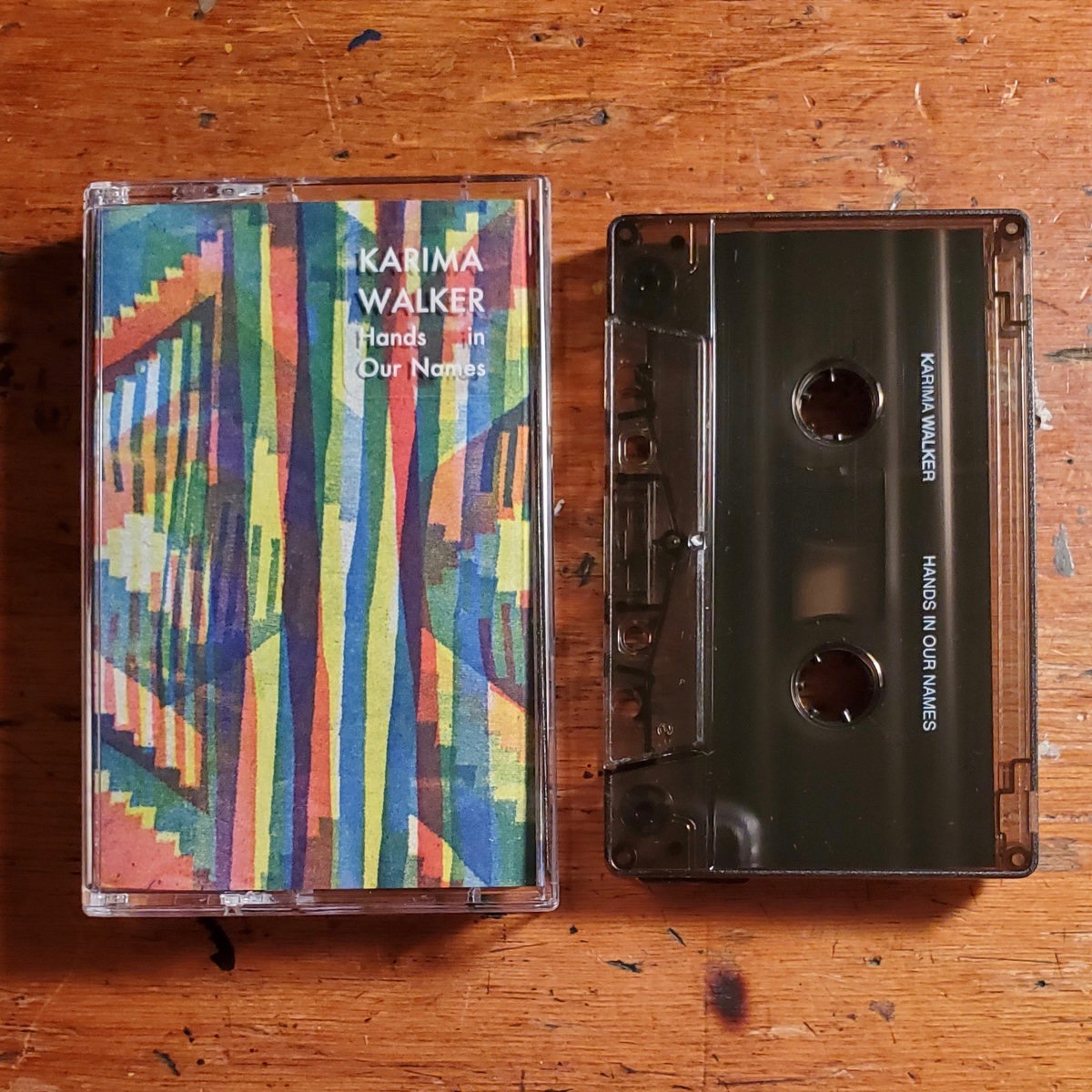 “With her uncanny Americana, Walker’s experimental inclinations have allowed her to explore some previously un-plumbed liminal space on the horizon, somewhere between sand and sky.” —Pitchfork

Karima Walker's 2016 ambient/folk travelogue, Hands in Our Names, is now available as a limited edition cassette. This edition has been remastered & resequenced since its original cassette release, & it sounds just as beautiful as it looks. Order your copy HERE.

Karima Walker will be touring the east coast with Advance Base in December. You'll find all of their tour dates HERE. 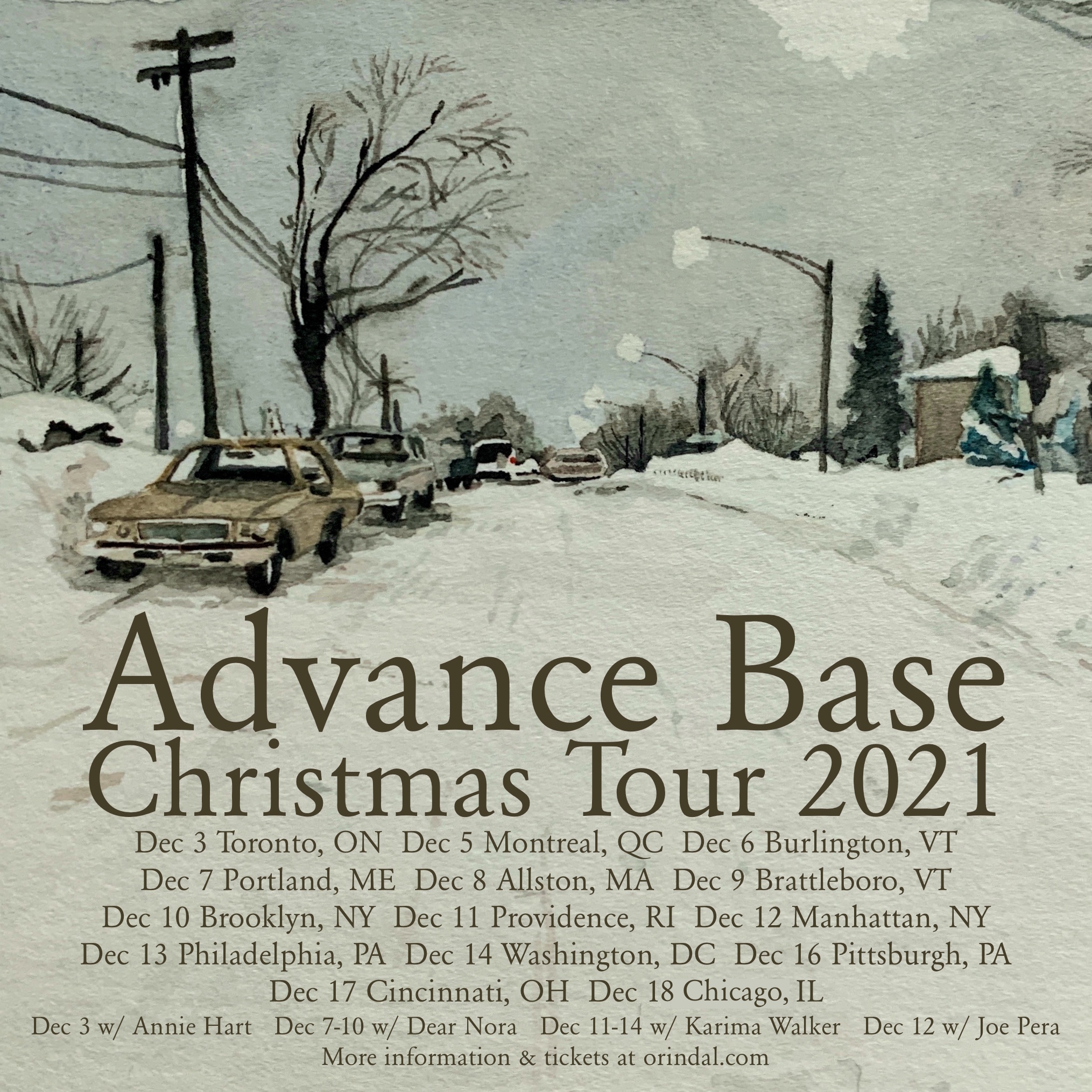